Infants do not discriminate by species: They are interested in learning from humans, primates, and maybe dogs?

Babies are excellent learners. They are biologically prepared to be interested in communication from potential caregivers, specifically human speech and faces. Likely reflecting our close evolutionary relationship, newborns and very young infants show similar preference for human and primate vocalizations and similar capacity to recognize individual human and primate faces. Leveraging brain systems in place before birth, infants readily learn from their experience with faces and speech, tuning their attention to the types of faces they see and languages they hear. When asked to learn from preferred and non-preferred faces communicating with them, infants’ learning evidenced that they only used the communicative cues from preferred faces (1). Although primates are near relatives from which we have diverged, they may not be the only non-human species which we are biologically prepared to attend. Despite the larger genetic differences and the fact that their faces and vocalizations are dissimilar to ours, we have spent thousands of years evolving in tandem with dogs. This raises the question: are we also genetically prepared to attend to and/or learn from dogs? 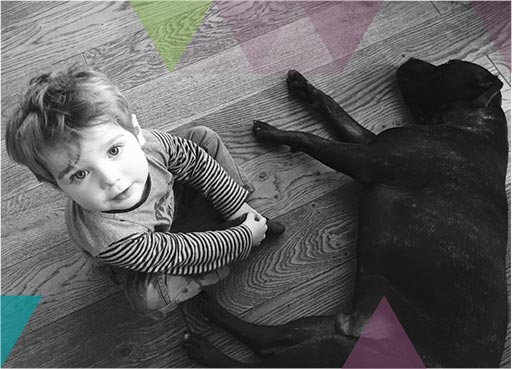 The idea of infants learning from dogs or showing learning benefits from dog ownership is not unreasonable. Even if infants are not learning directly from their canine companions, having a dog in the home may change the dynamic of the home to better support early learning. For example, infants in families with dogs would be exposed to a greater amount of slow, happy speech (used with both dogs and infants; (2), the type of speech that helps infants identify words (3). Additionally, parents and other family members would also be likely to be less stressed if they interact regularly with a dog (4). Reducing parental stress improves parenting quality (5), which is also likely to help babies learn. In addition to these potential indirect benefits of having a dog in the home, there are likely deeper, more direct benefits as well.

Babies are born to take advantage of opportunities for learning. At birth, babies are interested in human language and the primate sounds, but not other non-speech sounds (6). This suggests a certain evolutionary preparedness to learn from speech – potentially any mammalian speech. Dog-human co-evolution may have resulted in either dog barks changing to utilize the speech areas in the human brain or the human brain changing to respond to dog barks. Whether language areas in newborns’ brains respond to human speech and dog barks has yet to be investigated.

After their brains and their attention tunes to the experiences most relevant to learning, infants begin to use these experiences to understand basic communication. This starts by learning to link the sounds they hear with the faces they see. Infants can match happy and talking human faces and voices (7 & 8) as shown by findings that when shown two side by side faces, one happy, and one sad,  infants will look longer at the face showing the emotional expression that matches that in the voice. They can also match vocalizing monkey faces and sounds (9). Even without having a dog at home, infants can match the emotion in dogs’ faces and barks (10). Interestingly, dogs similarly match emotions in humans’ faces and speech (11). From the earliest ages, it seems as though babies are prepared for communication from many species, including dogs.

Although humans are the only species with language, infants seem prepared to use both human and non-human sounds to support learning.  Learning from what mom, dad, and other caregivers say and do is typical. Building on this experience, infants quickly learn the sounds for common objects (12). They can also use less typical experience – infants’ are able to use monkey sounds to support learning about object categories (13). Although no study has yet examined it, it is feasible that infants could also be using the vocalizations of their furry pet-sibling to support their learning.

All of these reasons argue for more research to measure the potential benefits of the inclusion of a canine family member for young or expectant families. Beyond the known benefits to children and adults, there are ample reasons to expect babies will also benefit from their pooch pal. Infants’ ability to show an understanding of dog emotions suggests an innate capacity to learn from dogs. If dogs improve the communicative dynamic in the home, enhanced at-home experiences, and ability to use non-human vocalizations to support object categorization may additionally support early learning benefits from dogs. We look forward to interesting and creative research to further our understanding of how a bulldog brother or spaniel sister may enhance early learning opportunities for growing babies.

To find out more or to get involved, please contact Drs. Janet Werker and Nicole Sugden: nsugden@psych.ubc.ca

Does a dog in the family help babies learn?