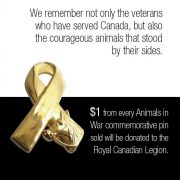 Stouffville, ON (November 11, 2017) – As Canadians come together today to remember and honour those who have served their country, the war-time contributions of animals will also be recognized with the laying of a wreath by an Ontario SPCA officer during the National Remembrance Day Ceremony in Ottawa.

“Today is a somber day, but a very special occasion, as the Society formally honours the bravery and service of animals in wartime,” says Connie Mallory, Chief Inspector, Ontario SPCA. “We reflect on the sacrifices of our veterans who have served Canada and the courageous animals that have stood by their side in times of war and peace.” 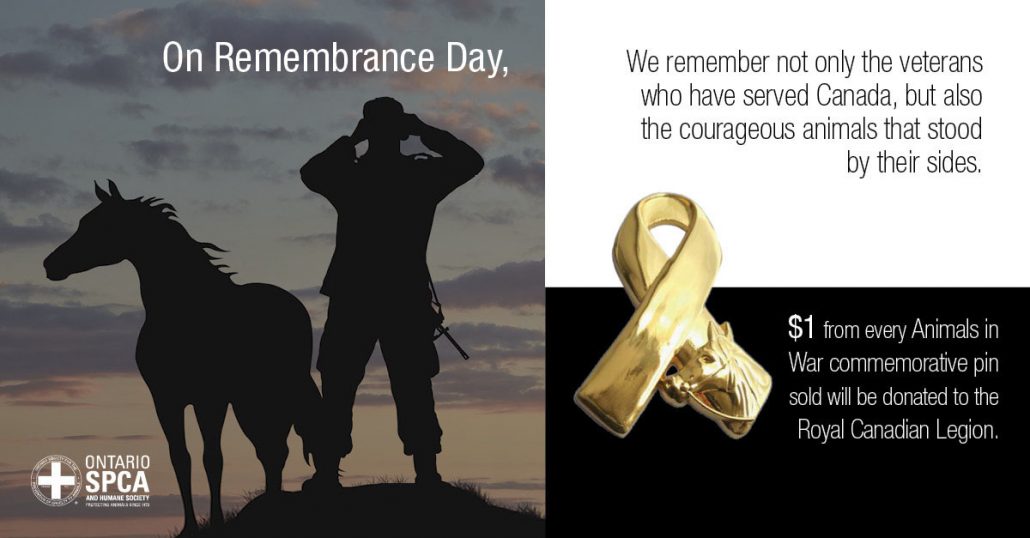 Placing the wreath during the ceremony will be Ontario SPCA Inspector Scott Sylvia, who will be proudly wearing the Ontario SPCA’s new Animals in War pin alongside his poppy. The commemorative pin was launched this year by the Ontario SPCA to honour the wartime contributions of animals. For each pin sold, $1 will be donated to the Royal Canadian Legion to support veterans.

Sylvia got his start with the Army Cadets and served in the regular armed forces until 1991. He later taught cadets as an officer of the Cadet Instructors Cadre and was commissioned as Second Lieutenant. This year’s ceremony is particularly special for Sylvia as 2017 marks the 100th anniversary of the Battle of Vimy Ridge. Sylvia’s grandfather served with the 148th Canadian Expeditionary Forces, 24th Canadian Infantry Battalion, and was wounded at Vimy Ridge. He survived and served until the end of the war.

“He chose to volunteer and serve, to fight against tyranny and for the freedom and rights of others,” Sylvia says. “We who live on – and each generation going forward – have a duty to remember and a greater duty and responsibility to do better in this world, to be better in this world, and to teach each new generation that the sacrifices of those who serve, past and present, have not been in vain.”

A variety of animals have served during times of war. Mules carried artillery, horses transported troops and hauled field guns, pigeons delivered crucial messages and dogs served as messengers, medical assistants, bomb detectors and search and rescue workers. To commemorate their contributions, an Animals in War Dedication was unveiled in 2012 in Ottawa’s Confederation Park.